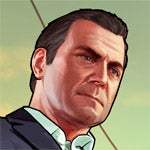 What would’ve happened if Salvatore Leone got out of the racket before it consumed him? Or if Tommy Vercetti bridled his criminal urges and retired to raise a family? Rockstar is looking to retired former criminal Michael, Grand Theft Auto V’s lead protagonist, to explore the narrative of a man at his breaking point with everything and nothing to lose. He thought he could buy his way into a life worth living, forsaking his past for the hope of domestic bliss. He likely never imagined that he’d become undone by the very urban excesses he spent his glory years trying to shore up. Or maybe he did; maybe he knew that he’d never be happy as a husband, that his wife’s love would grow cold and materialistic, and that he wasn’t the kind of man who could ever earn the love of his children. Its topics like these – not pulled from current events as much as directly observed from our collective living rooms – that pave the way for GTA V’s neo-anti-hero.

Dan Houser:“Michael, to me, is… Who is he? I know who he is, I’m just trying to… He’s the person who is trying to ignore some rather large mistakes that they have made. The person who’s trying to forget about certain practical but still selfish decisions that they took. He’s a man, also, obsessed by images and by appearances and who, when the world doesn’t live up to those images and appearances, doesn’t know what to do. He just retreats into his head. What he also is, when we started out… What he kind of evolved into as we began thinking about him and developing him… He was the first character we came up with. He began as the idea of, what happens to a regular GTA protagonist after they retire? Then you think, what would make him retire? He’s a man with a big ego and plenty of good values and plenty of bad values.

“One of the advantages of the three-character system is you can have characters who, if they were the only protagonist, would be far too flawed for you to find appealing. With other equally flawed protagonists, but flawed in different ways, I think it gets more understandable. His flaws are certainly his large ego, an inability to control his temper, and his willingness to make large moral compromises. To me, that’s a very interesting character. A guy who’s in his mid-40s and on the cusp of middle age who doesn’t know what to do, but made a bunch of money and does not know what to do with it. He’s theoretically won, but the spoils of victory aren’t necessarily what he imagined. For us that’s a very interesting character, unlike what we’ve done in the past or what we’ve seen in much entertainment in general, let alone any video games. That was interesting.” 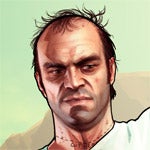 What’s so enthralling about Trevor is that he’s the mirror image of Michael. Whereas Michael is established and living the high life – Houser describes him as the GTA character that won — Trevor is stuck in a trailer park. He’s unhinged and untrusting. The pilot lives in filth and isn’t afraid to set a car on fire just because. He’s the dark night to Michael’s bright day, and while all we know is that these former friends had a falling out, it’s enough to be the most interesting story thread we know about GTA V. How could their paths have diverged so much? Does Michael’s place in witness protection mean he double-crossed Trevor? How will that dynamic play out in missions? We’ll have to wait and see.

Dan Houser:“Trevor was the other side of the GTA coin, I suppose. He’s the person who’s driven purely by desire, resentment, no thought for tomorrow whatsoever, completely id rather than ego-driven. Constant partying, constant madness. The only thing he doesn’t want to do is stop. He wants to keep going and ride it all to the end. Won’t take an insult from anybody. Kills without remorse, like a true psychopath, but very sentimental for the right reasons when it suits him. That seemed like another side of the kind of GTA coin or the GTA world, but very rarely as the protagonist. That seemed an interesting guy to have as a protagonist. Very unlike anyone we’ve had in a game before. If you began to develop him and Michael and their previous relationships… We wanted this feeling where you start off thinking one’s good and the other’s awful. Then you get spun the other way. Then you get spun back the first way, until you can’t decide.” 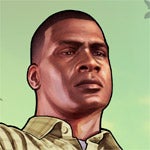 Franklin lives in South Los Santos and is the most traditional protagonist of Grand Theft Auto V’s trio, ex-street gangster who’s always looking for new opportunities. He’s a repo man working for Armenian luxury car dealership, which scams ambitious young hotshots by selling them high-end cars they cannot afford, only for Franklin to forcefully take them back when they default on the repayments. He’s befriended Michael after doing a job together and now Michael sees him as “the son he never had.”

Dan Houser:“The idea with Franklin was someone stepping outside their comfort zone and their normal way of doing things, because that way, even though they’re still in their mid-20s or whatever, that hasn’t worked. That world that they thought they’d be in and be able to make a success of has, thanks to the modern world or the changes in the economy or whatever it is, just failed. It doesn’t really exist. They’re now looking for something new. A new opportunity. They’ve gotten their qualifications and gotten all their experience and all they’re good at is driving and robbing. How do actually go forward and who do you get to a kind of mentor you? That was a good contrast. The gang-banger in the post-gang-banging world.” 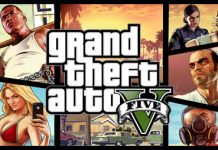 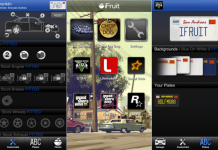 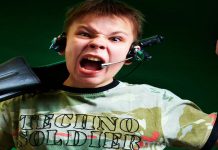 This site uses Akismet to reduce spam. Learn how your comment data is processed.

This website uses cookies to improve your experience while you navigate through the website. Out of these, the cookies that are categorized as necessary are stored on your browser as they are essential for the working of basic functionalities of the website. We also use third-party cookies that help us analyze and understand how you use this website. These cookies will be stored in your browser only with your consent. You also have the option to opt-out of these cookies. But opting out of some of these cookies may affect your browsing experience.
Necessary Always Enabled
Necessary cookies are absolutely essential for the website to function properly. These cookies ensure basic functionalities and security features of the website, anonymously.
Functional
Functional cookies help to perform certain functionalities like sharing the content of the website on social media platforms, collect feedbacks, and other third-party features.
Performance
Performance cookies are used to understand and analyze the key performance indexes of the website which helps in delivering a better user experience for the visitors.
Analytics
Analytical cookies are used to understand how visitors interact with the website. These cookies help provide information on metrics the number of visitors, bounce rate, traffic source, etc.
Advertisement
Advertisement cookies are used to provide visitors with relevant ads and marketing campaigns. These cookies track visitors across websites and collect information to provide customized ads.
Others
Other uncategorized cookies are those that are being analyzed and have not been classified into a category as yet.
SAVE & ACCEPT
ΔΙΑΒΑΣΤΕ ΕΠΙΣΗΣ